The Class vs. Nicoll

The class collaborated over the past two lessons to come up with a workable method. I had a method using cannons to model the kicking of the rugby balls. The class weren't so keen...

So, I challenged them to present a method that considered most variables and challenges and catered for them. The class won... 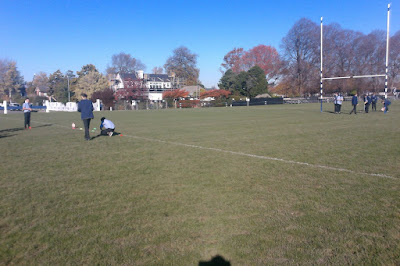 The first thing the class did was to get into smaller groups, each focused on organising a key aspect of the investigation. There was too much to achieve in the time allowed if the class all worked on one task at a time. The teams:

The teams came together today and presented their method. It was a little different to what we initially hoped for, but accounts for enough variables that it may be valid. 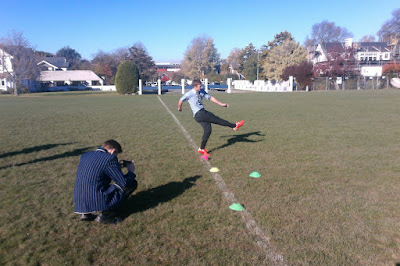 Today was Day One of our data collection. The "Method Team" took notes of any details they had not written in the original method. For example, they noted that measurements were being taken from the rearmost point where the ball landed. This is an important detail for consistency.

The " Equipment Team" had arranged everything, ensuring all balls were 30 PSI etc. They also took on the kicking duties. The "Catchers" (measuring the distance) had results tables and recorded every valid kick, while they ignored those that were "shanked".

The "Filming Team" took control of who kicked and when. They recorded the kicks so the angle of each kick can be calculated at a later date. They ended up being the "directors" of today and did a great job!!
Posted by Matt Nicoll at 21:49